2021 - What lessons can be learned from the ecommerce disruptions?

2021 was an eventful year for the world of ecommerce.

There were many ups and downs and a huge influx of changes that impacted both merchants in North America, the EU and merchants all across the world.

The last two years saw a surge in ecommerce growth due to lockdowns forcing temporary closures of brick and mortar stores, pushing buyers towards online shopping. However with the lockdowns generally ending around the start of summer in 2021 for most international markets, we started to see this growth slow down, as consumers expectedly enjoyed their new found freedom to go back to person-to-person experiences and revisit physical stores instead. 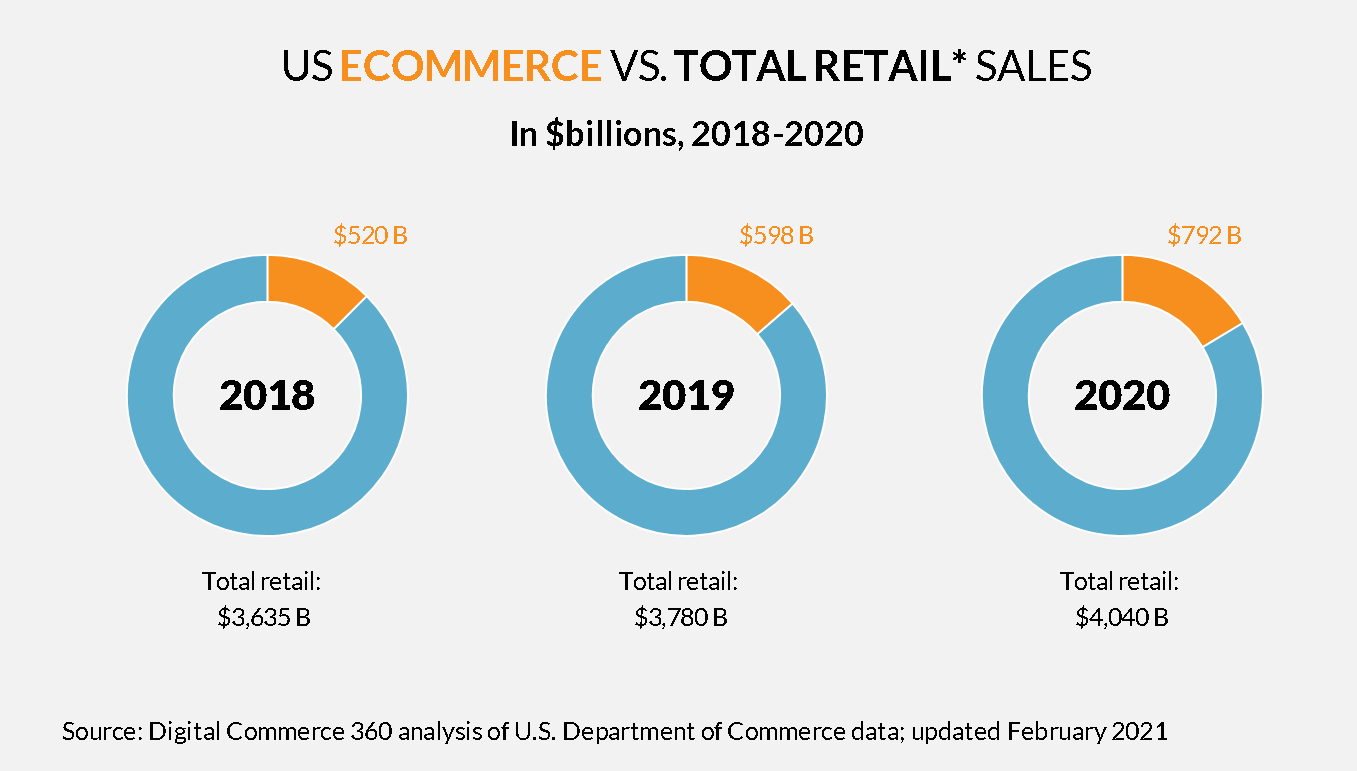 Ecommerce is steadily growing, but there are things that happened over the last year that did slow it’s impressive growth as well as merchants operations.

Let’s take a look back at what impacted 2021, and the lessons merchants can learn for a successful  2022.

Implemented on Jan 1st, 2020, Brexit had a direct and immediate impact on how merchants conduct business in the EU and Britain.By the end of 2020 a free trade agreement was negotiated and accepted. This form of agreement aimed to encourage trade between countries, by removing or reducing charges such as tariffs, taxes for trading across borders or even quotas that limit the amount of goods which can be traded at one time.

What were the most important changes?

The biggest upside to Brexit was that there were some agreements by the time the deadline came, which did look relatively uncertain at the time. However the ripple effect from the implementation is still being felt across ecommerce markets, it’ll take more time to truly understand the scope of the positives that came from this agreement.

Additionally, as the UK no longer followed the EU's rules on product standards, businesses needed to get used to new checks and fast. There was no real information with an appropriate plan ahead of time so when the changes were implemented, it gave little time for merchants to react. This meant more paperwork, which caused huge problems and significant delays when businesses products up at ports unprepared.

On July 1st 2021, there were sweeping reforms to the VAT obligations of merchants, introduced by the EU. 27 of the member states of the European Union voted to introduce another huge change in the form of a reform to the current VAT. The aim was to boost cross-border trade along the EU's single market through reducing compliance obligations.

One of the implications of the huge impact from Brexit, was other countries re-evaluating their trading procedures cross-border. The EU decided it’s entire VAT process required a large reform, to not only simplify the process for EU member states to trade internationally, but for other markets such as the US & UK to trade with the EU and vice versa, as well as balancing the scale of fair competition between the EU and outside markets.

Whether further changes from other markets will come into effect following Brexit and  the EU VAT reform are unclear, but what is certain is that merchants need to understand and start adapting to the new changes set by the EU.

The most positive side of the changes to the EU regulations was the more simplified approach to VAT. Originally merchants published VAT returns per market and this could have deterred smaller businesses from selling internationally, as well as being a bit of a complex system overall.

The change reformed this process into a one-stop-shop single VAT return for all markets which simplified the requirements for UK & US merchants expanding into new EU markets.

The biggest downside however, was the increased cost to sell into the EU for UK merchants. With businesses selling products under €150, the new VAT added an extra cost by having to charge an import VAT. Ultimately doing business in the EU became more expensive for a lot of businesses outside.

However, as the EU is one of the world’s highest spending consumer markets, it left many merchants with a difficult decision on what to do, due to the huge loss of potential sales by adopting to no longer sell into that market, or the increased cost to sell to continue doing so.

With the growing increase in consumer demand for ecommerce across the globe, a rise in the worldwide pandemic, and the transition effects from Brexit and the EU changes, global shipping struggled.

Due to the increased strain thanks to customs blockage from Brexit and EU regulation changes creating a significant bottleneck, but also environmental issues such as the pandemic and the suez canal incident, there was a significant impact to shipping that even continues to ripple further into 2022. 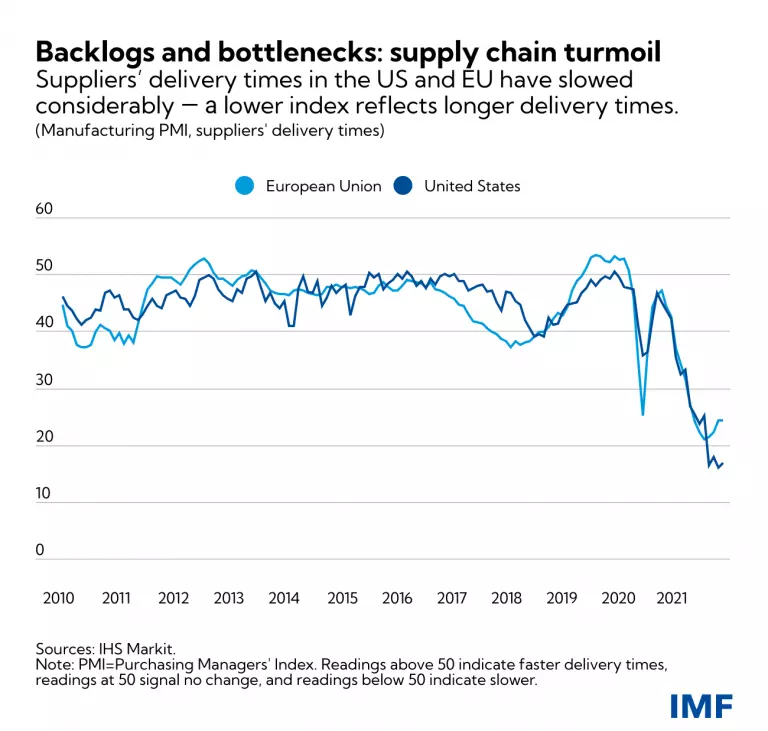 Global delivery is an important cog in the ecommerce system. Companies like Amazon and their next day delivery has evolved customer expectations where customers want their purchases now rather than later and this demand needs to be fulfilled.

Unfortunately shipping became one of the main challenges for merchants and a constant headache in the struggle to provide an expected customer experience.

This made a huge impact on delivery across the world. Prices increased, delivery times slowed down and ultimately customers saw huge delays globally.

The recent sharp drop in the delivery times index reflects surging demand, widespread supply constraints, or a combination of both. During such times, suppliers usually have greater pricing power, causing a rise in prices.

Moreover, these supply chain delays reduced the availability of intermediate goods which, combined with labor shortages, slowed down overall production and output growth.

As the number of COVID-19 cases continue to decline, capacity constraints and labor shortages are showing signs of easing, taking some of the pressure off supply chains and delivery times. However, it is quite possible to expect continued spikes of delays and supply chain disruptions across 2022 as new COVID-19 variants rise and fall around the world.

2021 saw one of the first Black Fridays in recent years to not break a record. It was very disproportionate to the previous years but not at all unexpected.

The Black Friday faced a number of unique hurdles of its own, including a national labor shortage, widespread supply chain constraints, and the emergence of a new COVID-19 variant which was sure to slow down any kind of sales over the period, as consumer confidence had taken a hit due to the previous challenges we’ve mentioned.

Though retailers made some gains — including in areas like in-store traffic and mobile sales — data shows the industry is still struggling to return to pre-pandemic levels. The findings also indicate a shift in consumer spending patterns, such as starting shopping earlier in the season and taking advantage of newer services like buy-now-pay-later.

"Consumers have been shopping strategically this season: Buying early and taking advantage of deals retailers have been promoting since late October," Adobe Digital Insights Director Taylor Schreiner said in a statement after the event. "Black Friday still remains a major online shopping day, but the surge in online shopping is coming from the less marketed days of the season."

According to data from Adobe Analytics, online sales reached $8.9 billion on Black Friday, slightly below 2020 levels which were just over $9 billion.

According to analysts, the mixed performance points to shifting consumer trends like buying earlier, particularly amid the supply chain crisis.

Another interesting change is the surge of smartphone usage for online shopping.

Mobile shopping totaled 44.4% of all online sales for that weekend, and a 10.6% growth Year-over-year overall. This highlights a significant change in consumer buyer behavior and something worth noting for retailers to adapt to for 2022.

What lessons can be learned?

2021 was a year full of challenges and learning opportunities for pretty much the entire world. Ecommerce was hit in a variety of ways which resulted in a very complicated and difficult year for merchants as well as having to adjust to all of the new rules and regulations, whether based in the UK, EU or US.

It’s important to look back and reflect on 2021 and what lessons can be learned from the challenges merchants and markets faced.

What lessons can merchants learn from 2021:

Be prepared for change

Whilst last year was unprecedented, in terms of impact to businesses and markets through all of the changes and lockdowns, it showed the necessity for businesses to become more adaptable and prepared for change.

With the changes from Brexit and the EU, it highlighted how at risk businesses were to react to difficult change, and whilst businesses eventually adapted to the new regulations, there’s questions raised over what the business impact for ecommerce of the delays were.

The lockdowns and global shipping crisis additionally exposed limitations in many merchants' operations and how they could effectively deal with global demand when supplier chains and customer delivery is disrupted.

It’s evident now that more than ever merchants need to be better prepared for change of any kind, whether its regulational, environmental or individual market changes that may impact day-to-day and longer term operations.

Last year also taught us the fragility of focusing on selling into one market.

When the EU implemented their new VAT regulations, any business that relied on this huge market became severely disrupted and sales & distribution almost came to a halt.

This identified how sizable the risk is to just sell into one market and should hopefully encourage merchants to experiment with and expand into new global markets and limit the risk of selling.

Implementing certain technologies into ecommerce operations can help merchants be more resilient to the impacts we saw in 2021 and more. Adding agile automations into the operations management can go a long way in ensuring smoother adoption to new changes or risks, but also a more efficient business in general.

By using technology to create a more efficient process, changes to things like VAT and how it’s to be collected & paid, communicating with supplier chains more effectively, sending the right documents to customs, integrating with delivery partners etc, merchants can really lower their risk

Ultimately: Find an ecommerce partner who can enable all of the above

If you own an e-commerce business, there’s a big chance you already sell internationally.  However expanding into new growth markets may be difficult or costly, especially if there’s uncertainties around those new markets.

Digital innovations mean it has never been easier to connect your online store with buyers all across the world. Yet, it’s still important to consider the hurdles you may face when selling cross-border. Navigating customs, duties and tax requirements, and border regulations can be complex, and varies by country.

That’s where it pays to partner with an international ecommerce expert like Glopal, which has the global knowledge and localization technology to take care of not only finding new growth markets for you but providing the tools to be able to sell into any global market and ensure you can scale your international sales, as well as be ready for any new worldwide challenges that may threaten ecommerce.

Learn how you can make your store more resistant to ecommerce disruptions in 2022.

Book a demo with one of our ecommerce experts.

Daniel is an international ecommerce expert at Glopal.

Social media is becoming increasingly popular as an ecommerce channel, as more and more people turn to it to browse for new ...
Start Reading
Daniel Porter Oct 13, 2022 6:34:58 AM 7 min read

The busiest shopping season of the year is underway and we are fast approaching the largest shopping event of the year; Black ...
Start Reading
Daniel Porter Jan 10, 2023 9:06:09 AM 5 min read

When comparing 2022 with 2021, it’s hard to define it as a memorable year for the world of ecommerce. It wasn’t much of a year ...
Start Reading